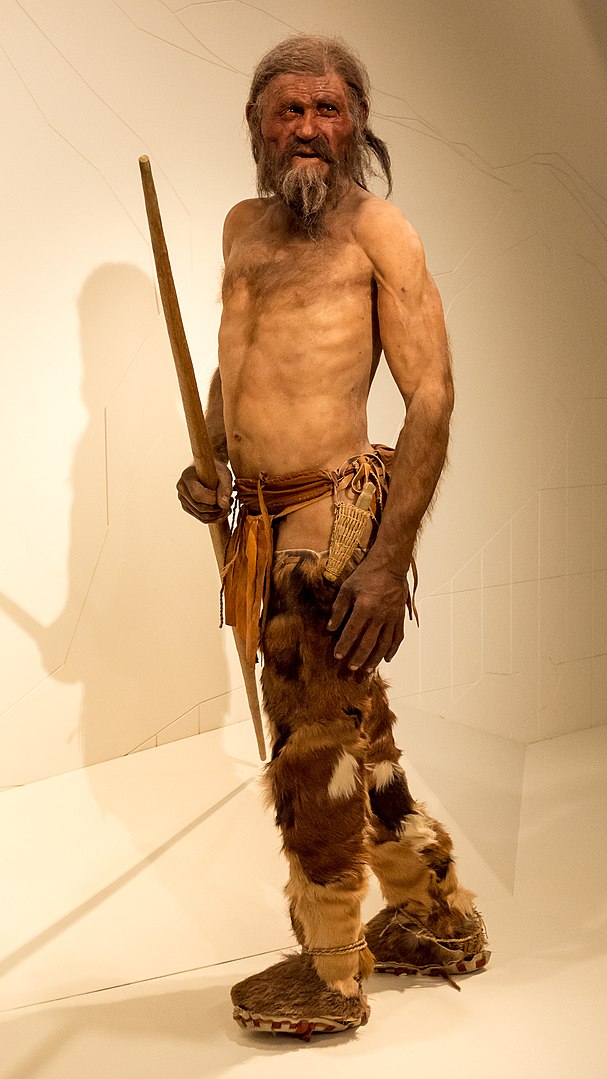 It’s early summer, but this high up it was still bitterly cold even though the sun hung high in the cloudless sky. What little snow had survived up until now crunched underneath the traveler’s bearskin soles. At least his feet stayed warm. His hand hurt, it had for the last couple of days.

Pain was nothing new, it was an old companion by now. But this pain was different, it was fresh, he knew who had done this to him. And he had sought to do worse. It was why he’d cut his visit short, his bow and arrows still not done. Better to put some mountains between him and the dead man.

There was no warning. One moment everything was looking up, the next a lance of fire sliced into his shoulder. He toppled forward, tasting old snow and ancient ice. Blood flowed quickly, every beat of his heart robbing him of his strength.

But he was a fighter; a survivor. He hadn’t gotten old by lying down when things got hard. He tried to push himself up, he could hear someone stomp up the glacier. A shout, a familiar accent. Guess the family had found out fast. Before he could turn to face the sneak, another blow, harder this time. He collapsed again, night was falling quickly.

This is not fiction, nor is it the full truth. It is but one scenario for how the man we now call Ötzi came to his final resting place high up on a glacier in the Alpes. His body and possessions are our best glimpse into a world for which we have but the scantest clues.

Since then, scientists have studied and scrutinized every part of him. Not only himself, but even the bacteria in his intestines have been genetically sequenced to find out more. We now know that at the time of his death, Ötzi was about 45 years old and had a wiry, short build. Broken bones and nose, along with a lot of wear and tear on his joints speak of an active, violent lifestyle.

Aside from aching joints, he also suffered from Lyme disease and whipworm. Other indicators showed that he’d just recovered from another illness a few weeks before. More recent injuries were the bruising and a deep cut in his right hand, all of them had the markings of defensive wounds. Meaning, they’d been sustained while defending from an attack.

Wealthy, or down on his luck?

Just as informative as Ötzi’s body were his belongings. While it is called the stone age, we must keep in mind that most of what people made would use more perishable materials. But up in the glacier, these were as well preserved as Ötzi himself.

His clothes were made of leather and hides, sourced from several different species including bear, domesticated sheep and goats. Where needed, these were stitched together using animal sinew, grass, and tree bast. His boots were a complicated construction which you couldn’t just slip on. They had an inner net made from tree bast, stuffed with grass for insulation. The outer shoe was made out of two pieces of leather, the top side came from a deer, the sole was bearskin with the fur on the inner side. It’s interesting that though Ötzi clearly had access to sheep and goats, no woolen items were found with him.

His tools were just as sophisticated. The bow was unfinished, made of yew and 1.80m long, the end product would be as long as him if not larger. This would indeed make it a longbow, and it might interest you to know that further along in the Middle Ages the famous longbows used by the English would preferably be made from Italian yew. The arrows, likewise still needed fletching and arrowheads. The only ones who did have them were broken.

A novel tool found with him was a wooden stylus with a horn tip hammered into the end of it. The piece of antler had been fire-hardened and it was used to retouch flint blades when they grew dull. I call this novel because no trace of them had been found before. We knew they maintained their flint tools somehow, but this is our best clue on how they did that.

One of those tools was his dagger, which was found complete with its ash handle and a leather sheath that was almost as big as the entire knife. The former was 12 cm, the latter 13 cm. The blade itself, however, was only as big as one of Ötzi’s arrowheads. It had been reshaped so much that there was barely anything left.

His most valuable possession, however, was a copper axe. The shaft, also made of yew, was 60 cm long and had a right-angle hook at the end where it gripped the axehead. The copper itself wasn’t local, it had come from a mine in southern Tuscany. The head had been poured into a mould, left to cool, then hammered to harden the metal.

This was not a cheap item, though it had seen hard use and had to be resharpened. Copper is a soft metal, which is the reason why bronze would supplant it for the making of tools. For Ötzi to be able to afford this axe, the shoes which probably were made by a specialist, and perhaps the bow as well, would suggest he had a certain status or wealth.

Yet his coat and tools had seen hard use, the repairs almost certainly done by himself. And he died alone, forgotten on a glacier. Which brings us to the murder.

When Ötzi was first found, scientists thought that his death had been an accident. Only years later, after a CT-scan found the flint arrowhead still lodged in his shoulder did they realize that they had a murder on their hands. A five thousand year old murder.

The cause of death was the arrow. It had come from behind and from a distance, around 30 meters or so. Perhaps shot from a bow very much like the one Ötzi himself was carrying. The arrow hit his left shoulder, shattering his scapula and tearing his subclavacal artery. There are indications that he was clubbed or hit right after on the head. Death followed quickly.

And there is the mystery. Who killed Ötzi? Why?

The previous injury suggests that he was in an altercation some days before. Had this person, or a friend or relative, followed him up the mountain and killed him over it? Certainly the evidence would align with that. But then there is the axe, why was it left behind?

It was valuable, and the killer did take the time to turn the body on its stomach so that they could retrieve the arrow. The head remained lodged, but the shaft was removed. Perhaps the axe was too valuable, an item that would have marked whoever possessed it as a murderer. Or it could be superstition, perhaps they feared that Ötzi’s spirit would haunt them if they took anything from him?

And that’s the frustrating part. For all that we’ve learned thanks to him, there is even more that remains murky. The scenario I started this post with is a possibility, but only one of a hundred others. And you’ll note that I used no names, for while we refer to this man as Ötzi, the truth is we have no idea what names people used or the language they spoke.

The past speaks to us, yet it is still silent