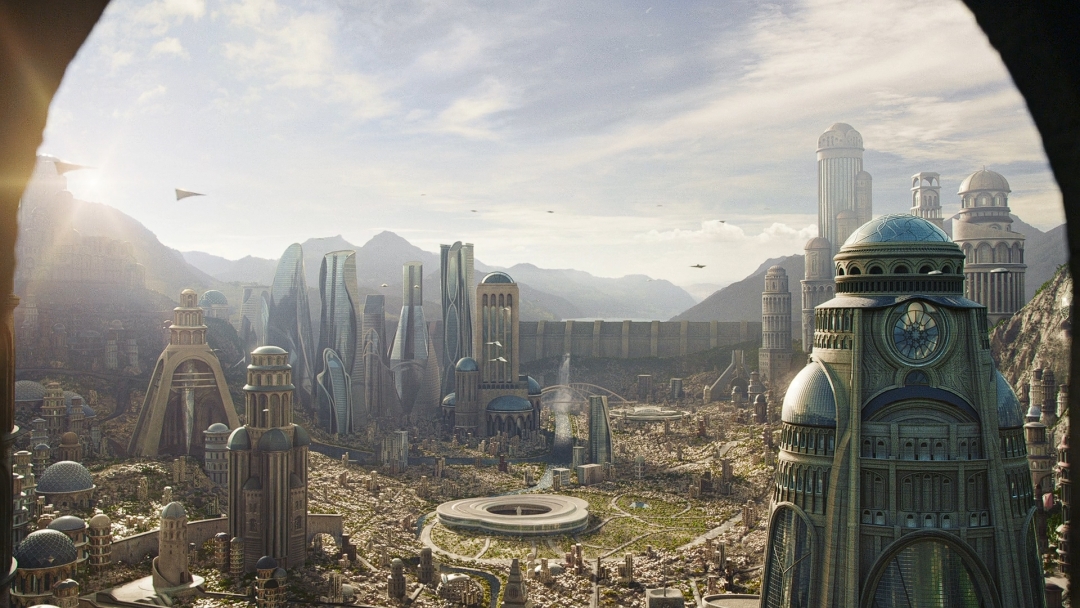 In today’s post we only see two new location I wish to discuss, though one comes in two parts. As in the previous parts, I want to look at both how these designs make sense in a historical sense as well as a story telling device. I will use background information from the books, but will do my best to avoid spoiling them.

We only get this image of a city from the Age of Legends but it tells us quite a few things. Beyond the flying vehicles and the lack of any broad streets fit for cars which suggest the city is not engineered with ground cars as the main mode of transportation, there is the variety in architectural styles we can see.

We have both skyscrapers and much move low to the ground buildings. The skyscrapers themselves also come in a number of styles and this makes sense in a city that grew organically over centuries. Some old buildings get torn down and replaced, others are preserved.

But behind them we can see a wall. Now, some cities today do still have city walls but they are remnants from a bygone age. Those cities have grown past them as there is no need or use for them. But from what we can see in this image, the city wall was built past the current extent of the city and given the relative size of it and the buildings, I believe it was built with the same technology base.

This wall tells us without words that this civilization is besieged and puts the conversation leading up to this shot in another light.

So looking at Fal Dara the first question that I wanted to settle was what kind of settlement are we looking at? A city, a castle, or a fort? There is a difference between these last two as a castle is the fortified home of an individual while a fort belongs to a political entity and is not the project of some rich family.

The characters in the show refer to the city of Fal Dara, but looking at it I can’t quite agree. Everything we see is geared for defense and there are no visible resources for this city to exploit. Not even trade, for while Fal Dara sits on the border it is a border with the Blight. And nobody would want to trade with Trollocs.

As it appears to have been built to guard Tarwin’s Gap exclusively, I lean towards a fort built by Shienar and then entrusted to Agelmar’s ancestors to maintain and guard.

As I said, this settlement is geared purely towards defense with an outer wall surrounding a keep. The design isn’t quite like anything I can recall. The V-shaped bastions on the outer wall are more something you see in gunpowder-age defenses but they are actually absent on the side we can’t see.

Note how high all the walls are. This is what you want in pre-gunpowder warfare as the main threat is escalade. People climbing over the wall. I would refer everyone to a fantastic new series on Bret Deveraux’s blog about fortifications for more on this. It certainly informed me on the discussion about Fal Dara and Tarwin’s Gap which we will see later.

This closer view of Fal Dara from the bridge leading into the fort really brings home the layers of defense and hammers home to the viewers that the people here are under serious threat. There aren’t really any towers visible, but there are some projections out of the walls. These allow defenders to threaten besiegers from multiple angles if they approach the wall.

What I can’t see here or in the other image is the drawbridge mentioned in the dialogue. We hear that two of the ropes for the bridge were cut. Traitors inside the walls has always been a serious threat during a siege. To name one example, Antioch during the First Crusade was captured because a traitor allowed a small group to climb the tower he guarded who then proceeded to open one of the gates.

But Fal Dara itself isn’t the first line of defense, that would be the wall across Tarwin’s Gap.

The wall itself makes some sense, though given enough time a force could just scale the large hills on either side and get around the wall. This structure’s main goal is then to prevent a large army from simply marching through the Gap and buy their own people enough time to rally the army and face the invaders.

Actually, this was also true for Hadrian’s Wall and the Great Wall. Neither could really stop a determined enemy, only delay them.

But there are some problems with the design of this wall.

There are no machicolations that allow defenders to drop anything on attackers that have reached the base of the wall, nor towers to shoot at them from an unexpected angle. Even worse, every light we see in the wall here is an arrow slit. This means that the wall is hollow and the lowest arrow slits are less than 10 meters off the ground.

Not much later in this episode we see why this is a bad idea when Trollocs scale up to those windows and start widening them with pickaxes. Walls in European and Japanese castles don’t have such arrow slits in their walls for exactly that reason. They wanted to make it as difficult as possible for an attacker to climb up and into the defenses!

It is no surprise then that the Trolloc army broke through.

It is a little disappointing that in none of the designs for the cities we’ve seen did the artists give thought to where the food to feed all those people would come from. I can forgive it for Fal Dara and the castle we see in Ghealdan as those were primarily defensive settlements and so they bring in food from elsewhere.

The design of Tarwin’s Gap was also a step back after everything we’d seen before that. But it was a step back and places such as Tar Valon and Breen’s Spring were excellent. Fal Dara itself too made a lot of sense, down to the asymmetrical outer wall.

I can’t wait to see what they’ll do in season 2. In the mean time, I am considering doing a post or two about the armor and weapons we’ve seen in the Wheel of Time show.

Let me know in the comments if you would be interested in that.