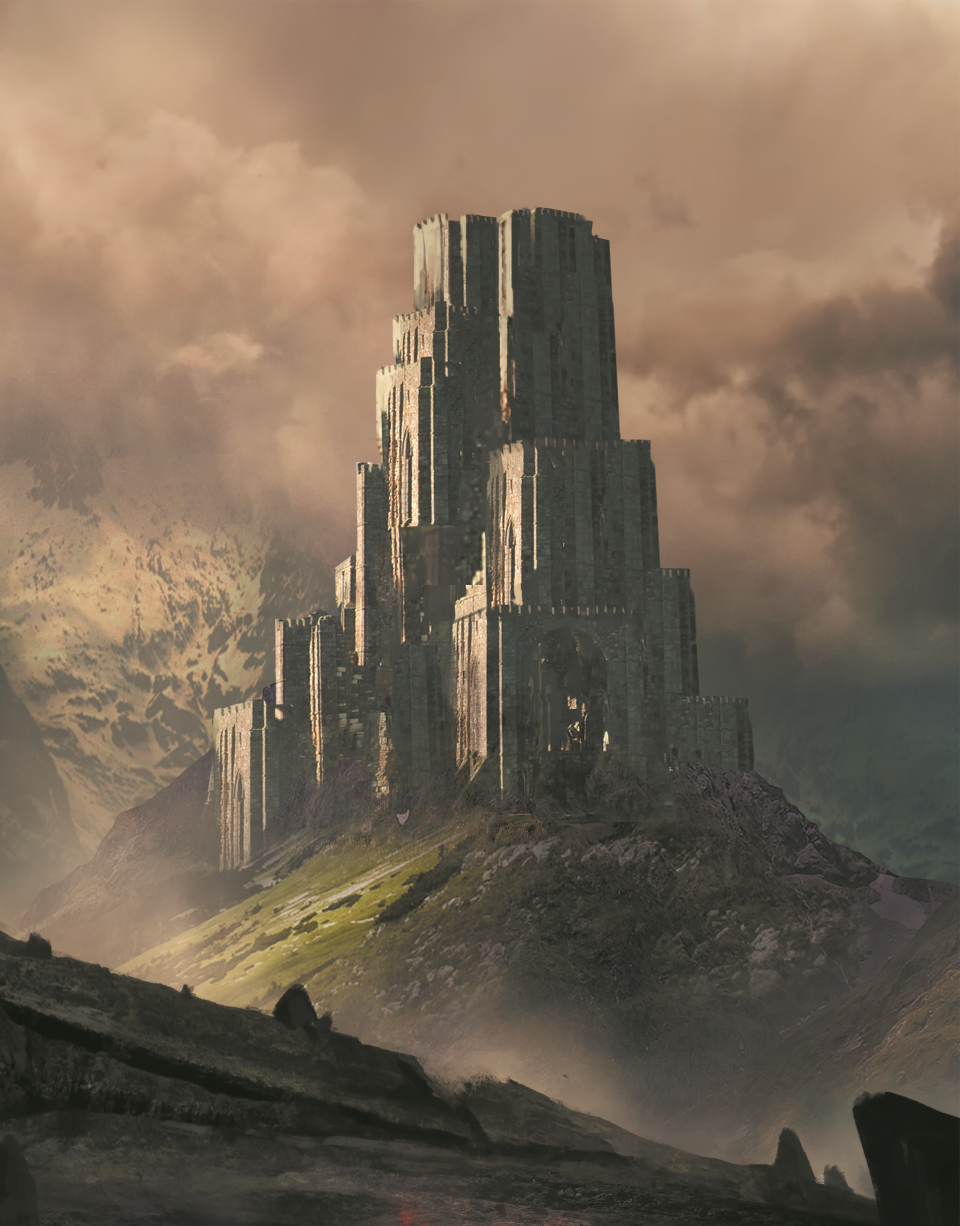 Last year, besides writing Living Sword 3 but more on that later, I also ran a tabletop roleplaying campaign set in the Living Sword world. The system we used was Godbound and it worked quite well, though I had to make some adjustments.

Exploring the world I created from this different perspective was quite fun and it helped me to flesh out more of the Living Sword setting. Today I want to share one encounter I made for the campaign. This place shouldn’t be considered canon as such, but it does give some insight into one of the mysteries of the Living Sword world; the Inza.

Out in the deep ocean, a tower stands tall. Unmarked by wind and wave, it’s entrance a good 100 feet above the surface of the water. This is also the first challenge. The material of the tower is near impervious so the PCs will have to devise a way to get up to the entrance when there are no stairs or handholds. There is a platform jutting out from the tower on which fliers can land.

The entrance itself is large, even something like a dragon could easily pass through. Inside it appears there is nothing, though there are designs worked into the floor. This elevator will automatically lower itself down five hundred meters to the observation platform once the party is inside.

There is however an alternate entrance. Much of the complex is on the sea floor, over a kilometre down and one of the floors has suffered a breach. A godbound of the Sea could get themselves and their allies down and into the complex through this gap. I’ll come back to this floor later.

The elevator takes the party down to an observation chamber that wraps around the tower. It’s walls are made  of clear crystal to give people a clear view of the outside. This is the only place in the whole complex where there is evidence of makeshift repairs as some of the panels are clearly glued back together again. There are tables and chairs scattered around the observation platform from which people could once appreciate the view. This furniture is all much to large for standard humans and more fit for giants.

One of these chairs is occupied by a mummified corpse wearing some sort of power armor. This body will collapse into dust at the slightest disturbance and the power armor will also fall to pieces. However, in the remains there is a crystal passkey which can be used to operate the elevator. When the body collapses, the cleaners of the tower are activated.

The cleaners are a swarm of dual polyhedrons that break down matter with their manipulator field. Individually, they can’t generate much force but working in concert they can do much more. The field has very little range. As a mob, the automated cleaners have the Blood Like Water ability.

Having survived the cleaners, the party can now go down. The interface of the elevator is a constrained field of sound that can be manipulated by the crystal passkey to change its tune. Unless the Godbound has some innate understanding of machinery or sound, they will have to experiment to find out what tune would take them to what floor. As the GM, you can roll for it or decide for them where they end up.

The accessible levels are the following: Gallery, Auditorium, Sleeping Quarters, Crafting Room. The tower in my campaign was actually a place to create art, but it works equally well as a research base or perhaps a religious monastery with some changes.

If the characters damage anything in the tower, they will encounter a Maintainer. This custodian automaton roams the tower, but will be alerted if anything is being damaged and will quickly come to investigate. If you want to add another bit of randomness, you can roll for where the Maintainer is each time the party heads to another floor or when an arbitrary amount of time has passed.

Here are the various important levels of the complex. These are in order from top to bottom but there can be other places if you want to add them.

Gallery – A long room with a row of pillars in the middle. Above each pillar resides sculptures of light, sound, space, or a combination thereof. Many flicker and writhe as they have grown unstable and will detonate at the slightest disturbance. Some of the artwork incorporates living people frozen in a moment of time.

A few of the pillars are still powered with celestial shards, though removing them is a dangerous undertaking. Should the party successfully free some of the people they will have a very hard time communicating. The people frozen in time are from very long ago and some are not from this world.

Auditorium- The room appears empty except for several spheres embedded into the floor. Each sphere is separated from the others by a good distance. If a character approaches a sphere it will active, throwing up a forcefield and generating a holographic world around it. Those within can only see this alien vista.

One of the spheres will start playing a story in a language that only a Godbound of Command or Knowledge would have any hope of understanding. The play deals with the anguish of a captain who has to balance their relationships and the responsibility to safely reach their destination. It appears that Inza had at least three genders and the journey’s dangers involved forces that are hard to grasp. Gravity wells, sun storms, and an encounter with an older version of their ship.

Sleeping Quarters – The breach in the complex is in the hallway of this level. A forcefield prevents the water from rushing into the elevator but it will not stop objects from entering or leaving. People can try to explore the level by holding their breath but without a godbound of the Sea the pressure of the water is a serious hazard.

While much of the personal possessions are either ruined or undecipherable, there is what looks like a drawn map. The continents are near unrecognizable, but it seems to show some known locations, and some unknown Inza structures. There may also be some other treasures here, but it’s up the GM what would make sense to be here.

Crafting Room – The works of art were created here and some examples that were yet unfinished remain. There are also a couple of celestial shards in storage in this place. However, they are sealed behind a lock that will defy mundane force or mortal magic.

Studying the material here will allow a Theurge to learn a Theurgy that involves the Celestial Engines which cover time.

It is a constellation of crystals and carved plates of metallic stone, all of them circling a twisted piece of space. It is capable of speech, but it’s cognition is limited. It’s creators considered other species as little more than raw material and this attitude informs the Maintainer. It will not allow the party to roam the tower freely and will insist they wait for a supervisor that will never come. While it does not know the players language at the start, it can discern it within seconds with a few examples.

The Maintainer has three abilities:

Reflex of Regret (Action): Commit Effort for the scene. The Maintainer replays its round as if its actions had never occurred. It can use this gift only once per round, and it can’t use it if it’s dead or incapacitated. Any Effort expended by the Maintainer is not regained by using this ability. As only the Maintainer is affected, any damage done to others this round is not undone.

Perfection in Amber (Action): Commit Effort for the scene. The Maintainer picks a spot within 50 feet, everything within a radius of ten feet becomes locked in time for the rest of the scene or until the effect is dispelled. A Worthy Foe is allowed an Evasion save to dodge this effect.

Glory of Yesteryear (Instant): Commit Effort for the day. The Maintainer resets its own time to an earlier point of reference. Any damage suffered this turn is undone as well as other effects. Effort is not restored by this ability.

This encounter can be adapted to work in a different campaign, simply have it be a different Former Empire that created the tower. Or perhaps the Inza visited whatever realm your campaign is set in as well? Do let me know if any of you wind up using it, I’d love to hear if your players enjoyed the scenario as much as mine did.

Now for those of you who have read this far I have some other news as well. The Living Sword 3 has survived the attention of the beta readers and is now in the hands of my editor! Yes, this means that The Living Sword 3 will be released this year, I’m aiming for a release in August.

If you want to make sure that you don’t miss it, sign up for my newsletter or follow me over on Goodreads.