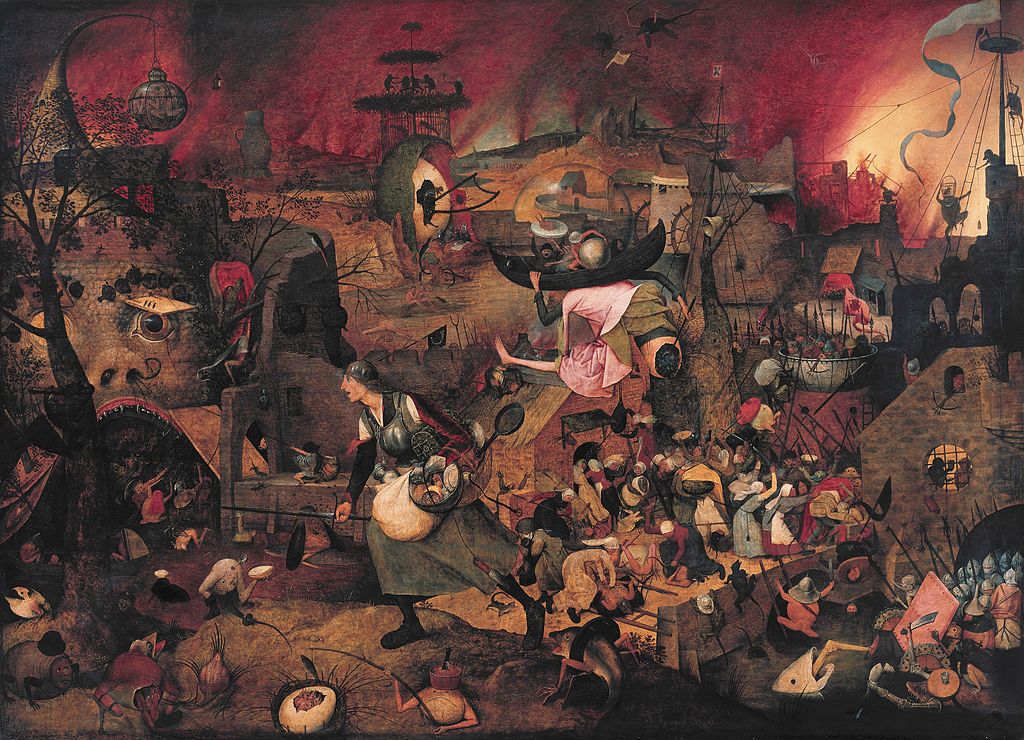 Recently I came across a reddit threat over on r/fantasywriters asking how to create monsters based on the seven deadly sins and I found myself inspired. This blog post is based on the comment I made on that thread but I’ve expanded each of the entries to talk more about the thoughts behind the monster and how it embodied the sin.

Beyond their use in a story I’ll also briefly consider how each monster could work in a tabletop game but I will keep it system agnostic since I don’t know if you want to use one of these in your DnD 5e, Pathfinder, or Godbound campaign.

But let’s start with the first of the deadly sins.

Traditionally, monsters based in this sin focus on the seductive aspect of this sin, but I wanted to go a different route. Rather than focusing on seduction, my Lust monster is based in the biological drive that lies at the basis of Lust.

The Lust monster it is a small creature with fleshy wings and spindly legs that looks a little like a heart from above if not for the long, thin tail with a stinger on the end. The venom in this stinger is not deadly or even dangerous, instead it induces a sense of euphoria and pleasure in the victim. The danger comes from the egg that is also injected by the stinger.

This egg hatches within half an hour and the young monster then eats its way out of its host and will in turn seek to lay its own eggs. As it burrows its way out it also excretes the venom, none of this causes any pain.

You can now see the great danger of the Lust monster, or should I say, a swarm of them. Their numbers quickly multiply as they lay their eggs in not only people but livestock as well. One or two hatching monsters won’t kill the host unless it is small, but dozens will. And these hosts will quickly seek the attention of the Lust monsters as they become addicted to their venom.

In a tabletop game, I would represent this creature only dangerous in a mob or swarm, depending on the system. While they can hurt someone with their bite, their true threat are the eggs in their stinger. Might represent that as a special attack or ability of the swarm that while not too dangerous in the fight itself, might mean the aftermath of the fight is actually something worth roleplaying.

With this sin I went with a far more obvious route as I envisioned the embodiment of this sin as a a worm made of threads that consumes everything in its path. Each thread in turn is a small worm with its own mouth desperately trying to get a crumb. As it moves the small worms at the head of the mass get eaten by the ones behind which lengthen as they do so until they break up into two worms and the process starts again.

If used in a tabletop game it would start as one creature, but hurting it sufficiently would cause the creature to break up into multiple smaller ones. Individually, they would be weaker of course but multiple opponents would change the nature of the threat. Especially as some worms would try to escape the threat and go for an easier meal. I would not represent this monster as a swarm or mob as the individual threads of the worm are not a threat on their own.

With this monster I didn’t really go for a combat route, indeed, the Greed creature doesn’t want to kill anybody. It just wants to have everything. Invisible, with many long arms and deft fingers, Greed steals. It takes people’s weapons, tools, money, furniture, even their clothes and food.

Everything it can carry is absconded with and taken back to its hidden lair where it is displayed around its resting place so it can admire its growing collection. It is not interested in taking lives, it doesn’t even consider whether its actions could hurt others. That’s not a consideration.

But people who have nothing won’t survive long and as such the predations of this creature can destroy a community as surely as a Lust or Gluttony monster can. In a tabletop scenario the Greed monster is hard to corner and might not be a combat encounter at all. Instead, it could be about finding the lair and retrieving some treasure from it to further the party’s quest.

However, the Gluttony monster will defend its collection and as it can’t be seen it is hard to stop when it starts throwing odds and ends at the party.

I had to think about this one for a moment as it’s hard to have an active threat based on the concept of terminal laziness. But taking some inspiration from Star Wars, the Sloth monster buries itself in a pit in the ground and let’s its prey come to it. Yes, like the Sarlacc most recently seen in the Book of Boba Fett.

But rather than simply sit and wait, Sloth emanates an attraction to every sleeping creature that enters its range. They sleepwalk into its waiting maw where they are slowly digested. Anyone awake that tries to approach to Sloth will find themselves growing heavier and more tired the closer they get.

True to being Sloth, in a tabletop encounter I wouldn’t run this as a combat scenario. When threatened Sloth simply retreats further underground. This would be more of a puzzle of figuring out what is causing the disappearances and then how to kill it.

Far more active than Sloth, Wrath is actually a small thing wrapped in a dripping, crimson cloak. It’s arrival is heralded by a red mist that fills the settlement. It’s people find themselves remembering every petty irritant and old grievance as if they have just happened, turning them into mortal insults that must be repaid in blood. The community quickly descends into a frenzy of murder and torture as Wrath watches and drinks while the mist grows thicker.

In a tabletop game, the GM could have the party stumble upon the aftermath of a visit by Wrath. This will depend on the tone of the game as this should be a scene of horror. Facing Wrath itself, the GM can have it try to exploit any interparty conflict though this should be handled with great care and only with buy in by every player. If that’s not something the players want to engage in, you can have Wrath switch to a more combat orientated form when threatened and play it as a straightforward combat encounter.

Much like Greed, the Envy monster wants. But rather than things, it wants the qualities of other people. Their wit, their looks, their strength, their youth, everything they have but it does not. In its wake it leaves broken people who remember being young, beautiful, smart, or strong. They recall what taste was, how beautiful a sunset could be, but that’s gone now.

These things that Envy takes don’t last so it is in a constant, desperate search to renew itself. For it fears becoming that hideous, slow, dying thing again most of all. Envy never seeks others of its kind as they can’t stand each other most of all.

If you want to use this in a tabletop game, I would have it’s attacks hurt a player’s statistics rather than their health if the system allows that. Or give the players conditions if the system does not. Any successful attack would in turn improve Envy’s own abilities, though there is the danger that this turns the encounter into a slog or make it feel unfair to the players. In that case, you as GM can always have one of its aspects it had stolen previously run out in that opportune moment.

Even more than Sloth, I had to think a while about what a Pride monster would be. I settled on something that would feel itself above it all and in turn, infect others with that same idea. But unlike Wrath, Pride doesn’t tear a community apart. On the contrary, it binds it closer together.

It doesn’t look like a monster when it arrives, but as a golden statue that is just there in the center of town one morning. The people can only consider it a blessing, a sign of divine favor. That rumor spreads and people come to see the statue from far and wide and the town grows rich from these visitors.

This community begins to demand tribute and obedience from the villages and hamlets around them, even going to war with those that don’t accept that the heavens obviously favor them. With their moral high and sharing this absolute belief in how they are favored they will win these early battles. And buoyed by these victories, they throw their defiance to those higher in the hierarchy.

Some in the community will not go along with this and are either exiled or killed as disloyal and not true members of the community. Thus when the king at last arrives with his army the community finds itself shrunk to a hard core of true believers that will simply hurl themselves at an opponent they can’t hope to win.

The end comes quickly now and as the survivors huddle in their homes, they’ll look to the statue to reassure themselves that the gods still favor them. Only to find that it has disappeared as mysteriously as it had arrived.

In a tabletop game, the party might have been hired by either the king or a religious authority to investigate this golden statue. If they realize just what it is and confront Pride, they should find themselves in the fight of their lives. The community would defend Pride while the monster itself should be of a power level that justifies its own belief in how awe-inspiring and fearsome it is. But even as it fights, Pride should only exercise minimal effort unless pressed as Pride is not immune to the sin and will consider the party beneath itself.

I hope you found some inspiration in these ideas for monsters based on the seven deadly sins. I mostly focused on how they could work in a tabletop game but it’s also possible to turn these monsters into a threat for your story.

Please let me know if you like posts like these and would like to see more of them or if you want me to try and stat one of them out in either Dungeons & Dragons 5e or Godbound. I have the most experience in those systems.

And if you want to read more monster content why not signup to my newsletter? You now get the short story World Eater for free when you do. World Eater takes place in Jagad, a city built inside the not-quite dead corpse of an eldritch god and follows a Finder called Sebachi on his next job. He is tasked to find a box containing a piece of the comatose titan’s brain and return it to its rightful owner. The pay is good, the danger real.

And if some bright spark decides to open the box, their world may end. For nobody knows what will wake the dreaming beast. Only that the people that live on and in Jagad will be its first meal when it does.