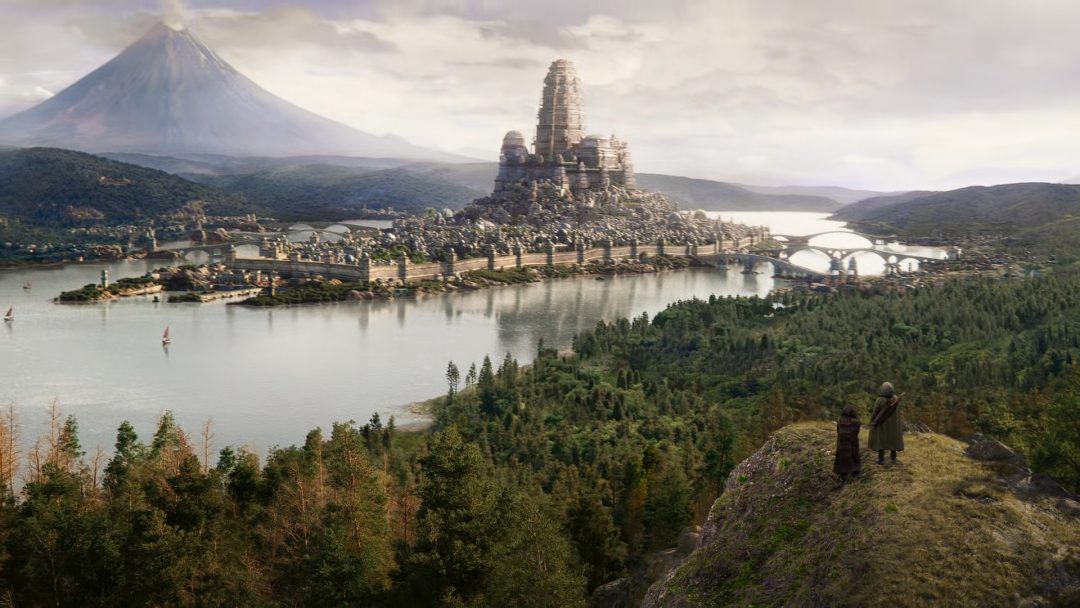 We start right at the cold opening of episode 4 with a castle on fire and under assault.

In the books, Ghealdan is the name of a country but there’s no city or town of the same name. The capital for example is Jehannah and it’s not clear from the dialogue if this is supposed to be that. My own conclusion is that this is one of the king’s castles located in a strategic location blocking the advance of the army of the False Dragon Logain.

You can see that it is located in a commanding position overlooking the lands beyond but there’s no sign of the farmland a city would need to sustain itself. If this is just a castle with the necessary supporting buildings attached that makes sense as it would be built not with economic considerations but military ones in mind. As in what is the most defensible location in the area.

Note that they used a real castle as a shooting location, the Alcazar of Segovia.

Now the castle we see in the photo was updated in the 16th century with those conical spires and slate roofs. This was after gunpowder had made this type of fortification obsolete and so by that time it was more of a palace than a military post.

At the start of the Wheel of Time there are no guns or cannons so this castle is still very much an active military fort. It makes sense for the king of Ghealdan to take a stand there or gather his army there. But it’s not rated against the One Power as Aes Sedai don’t get involved in wars. Which is why it’s on fire when we first see it with the king trying to escape his own castle.

I also like how they chose a very different style for Ghealdan. It makes sense that people living in a different environment and steeped in a different culture would build differently.

We hear of this city in previous episodes, but in episode 5 we get to see it and it is as impressive as it’s supposed to be.

To get a sense of the scale I would point to the ships we see on the left of the image. Those aren’t small little dinghies but almost certainly trading ships. Still one masted so not gigantic, but a medieval cog found in the Netherlands in 2015 was still nearly 20 meters long and weighed a solid 55 tons.

The towers in the wall project out from it allowing archers in those towers to subject any attacker to a crossfire. Yet the towns on the other side of the bridges on either shore lack any walls suggesting that the rulers of Tar Valon don’t consider them part of their city.

Note that the White Tower itself also appears to have a wall of its own which would mean it could function as a citadel. A place to retreat to should the city wall be breached.

This image speaks of several things. That the Aes Sedai are projecting power but aren’t so secure that they would neglect their defenses. And the large port with ships coming and going as well as the towns that have grown up around the six bridges tells us that a lot of trade is coming through this city. This is a city of power & wealth.

Yet I have to point out that there is no farmland in sight. Instead we have hills covered in trees as far as the eye can see. This makes no sense and given that this entire view is CGI anyway, why not fill it with fields instead of forests?

Because between the river and the volcano this land should be quite fertile which would be one of the main ways to produce wealth in a pre-industrial economy. So we got some of the signs of wealth, but not the visible means of producing that wealth.

You can see more signs of the wealth and power the builders are trying to project in this view of the city’s gate. Note the decorated bands running along the towers and the wall as well as the statues of Aes Sedai looking down on the people coming into their city. Harder to see, but the two guards in white appear to be women which is a nice touch.

But if you give the wall a second look, you’ll see that defense has not been neglected. Arrow slits allow defenders to take shots at attackers coming over the bridge from two directions and the battlements themselves project out for what I suspect are machicolations allowing defenders to also drop stones and anything else down on anybody that survives to reach the wall.

The merlons however appear to be too small. We can see in this other screenshot that they don’t even come up to the chest of the guards. That’s not enough protection, they should be taller than a man so that defenders are only in danger when the step out to loose an arrow themselves.

I do have a problem with the gate itself, which looks too narrow. You can hardly fit one cart through and in this shot we only see people coming in but filling the entire road. It is possible that some of the gates are for entering the city and others are reserved for people exiting Tar Valon.

Which leaves the question on the carts. We don’t actually see any inside the city, but I have a hard time believing everything is brought in on foot or on the back of pack animals. It is of course possible that not all the gates are of equal size. A view over the walls of Tar Valon giving us a better idea of how densely settled the island is.

This closer view of the city can remind us of another city we took a look at in part 1, Shadar Logoth which was once Aridhol. This makes sense both outside the universe as well as inside. Reusing assets helps bring the cost down for a series that takes some serious money to make. But both Tar Valon and Aridhol were built by the same people, the Ogier. And of course their own aesthetic would then come back in the design of both places.

The show continues in both realizing distinct styles for distinct cultures as well as utterly forgetting about the fact that people need places to grow food. In fact, they need a lot of room to do that. I sort of hope we’ll get to see some of that in season 2 but it is really only the smallest of concerns.

I’m very much enjoying the show so far and I hope you do as well. But feel free to tell me what you thought of Tar Valon and whether you’d like me to take a look at other aspects of the show.