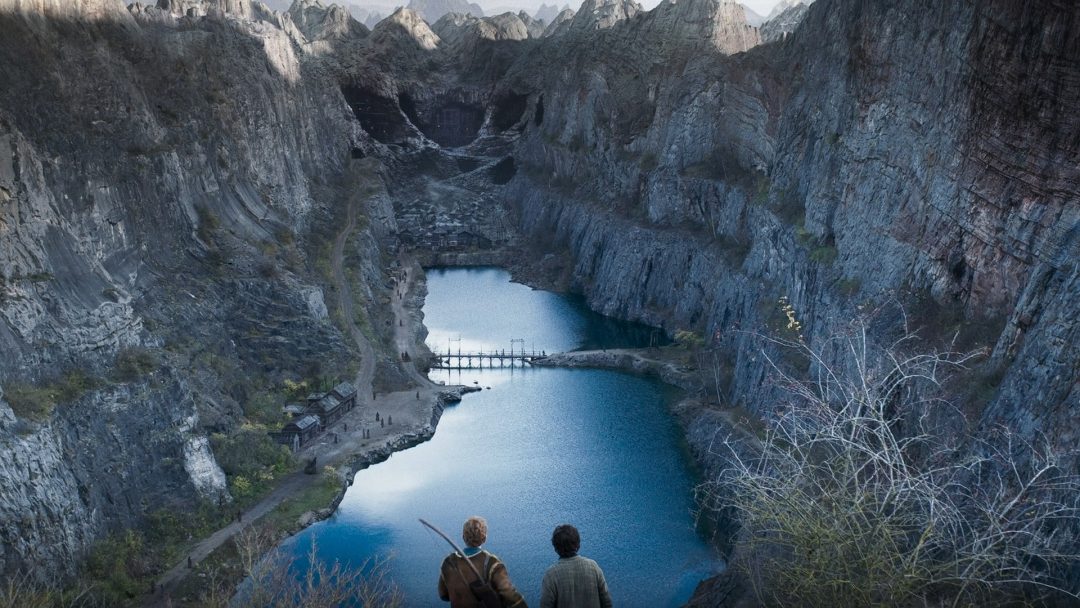 So the first three episodes of the new Wheel of Time series has dropped and I have been very impressed. As some of you may know, I’ve long been a fan of the Wheel of Time books and seeing them on the screen was a delight.

Now I’m not going to do a review here, but I do want to talk about the series and I believe I’ve found a neat angle to approach the show. I want to take a look at the settlements and ruins that populate the landscape we see in the show and see how they fit with history and how they build the world the story takes place in. What’s good and what’s not so good.

This post will be for the first three episodes and while I will not compare it to how the books describe places and the like, I will refer to it for background information so only continue if you’ve read the books or don’t mind spoilers.

We start where the show starts, with Emond’s Field. The name is not mentioned in the first episode, they just refer to the larger region called The Two Rivers.

There are some things to like. As this is pre-industrial the houses are of course all a little different, though still adhere to a building tradition. Note the steep roofs that prevent snow from building up too much. There is a communal space at the center of the town for celebrations, meetings, and trade. And the most important buildings in the town such as the blacksmith and the town’s only inn face this open area.

However, the town’s surroundings make less sense. Rather than surrounded by fields where they grow their food, the village is instead surrounded by forest which butts right up against some of the houses. There also isn’t a clear source of water except the one up on top of the cliff. Which would be where I would have expected to see the town for that very reason instead of at the bottom of it.

The absence of a wall or palisade on the other hand is entirely justified both in-universe and as a narrative device. It visually tells you this is a peaceful place and given how isolated The Two Rivers is, it makes sense that they wouldn’t bother with one.

I at first thought this was another view of Emond’s Field, but there’s a couple of reasons that doesn’t fit. For one, off to our right are Rand and Egwene looking out over the valley. Given how far the village looks to be, they would have had to travel for several hours to reach the vantage point. That doesn’t work with the rest of the story. And where’s the cliff with a river we saw in the previous image?

So we have another village here in The Two Rivers region, either Deven Ride or Watch Hill. And this one works much better. We see terraced fields where the villagers grow their crops and zooming in there is the hint of a stream that runs through the town.

Again, much like Emond’s Field this town has no defensive structures emphasizing to the viewer that this is a peaceful place.

When I saw this while watching the episode I took it for an aqueduct, but looking at it again I’m not so sure. Roman aqueducts tend to be a lot narrower and often taller to provide the necessary slope so the water will keep running. This appears to be wider and we see hints of structures at the pillars go up. They are far too skinny to support another level of similar width as what we see.

I now believe we are looking at a bridge, which suggests this flat plain we see the characters ride on was once a river. Given that it appears to be made from brick it is probably not a structure from the Age of Legends but it could have been built before the Trolloc Wars that happened 2,000 years ago or it was a project during Artur Hawkwing’s reign 1,000 years ago.

This one little transition scene that lasts about 5 seconds has its own story to tell. It tells us that history didn’t stop between the Breaking of the World 3,000 years ago and the events of the show.

I could do an entire post on Shadar Logoth or Aridhol as it was called during the Trolloc Wars, but I will refrain from that and only focus on a few areas. First, we look at Shadar Logoth from afar.

Aridhol makes sense in this location. It is located near a river which provides it both with water as well as a major trade route. We see no harbor, but the evidence of that might have been hidden by the wall and any docks that had been outside it would have been destroyed or submerged in the intervening 2,000 years.

The land around it is flat and should be good for farming. Now that no farms are in evidence is no problem for once, because this fantasy city has been dead for two millennia. The fields have long since been swallowed by the forest. From this distance we can’t really see that forest, but we can see the wall.

This wall encircles the entire city and has no gates. This is a problem and wasn’t done historically for obvious reasons, but it is part of the mystery of Shadar Logoth and its fate so I have no problem with it. Likewise, the sheer height of the wall is not that big a problem. It is very tall, but there are a few walls that reached a similar height. I am thinking of the city walls of Dubrovnik and Baghdad, the latter reached up to 30 meters high.

However, what is an issue is the width of the wall.

This wall appears to be less than five Perrin’s wide. Now Perrin is a big guy, but not that big. We expect a wall this high to be thicker than this by several meters. Especially when it appears there are stairs built into the wall itself. As it is, the wall might be too narrow to be stable given its great height.

Another thing I noticed were the roofs of Shadar Logoth.

Note that while there is some damage, they are mostly still intact. But this city has been abandoned for 2,000 years. Just about every roof support structure is made out of timber and should have collapsed long ago. While a note is made that not even bugs dare to enter Shadar Logoth, fungi and bacteria probably can’t be scared off.

While we can speculate that Mashadar kills anything alive within the city, including fungi and bacteria, thus preventing all forms of rot. The effects of 2,000 years of wind, rain, and snow should have done more than punch a few holes here and there. Really, I would have expected all the buildings to be hollow shells filled with the debris of those roofs.

That they aren’t could be explained either as a failure to consider just what sort of time span 2,000 year is by the show’s production team or it is intentional. Time hasn’t passed in Shadar Logoth as it should and it is now an empty memory to the evil that grew there.

We end this post with the one new location we got from episode 3. Breen’s Spring is from the books though it isn’t noted as a mining town there but just another town on the road to Caemlyn.

There are things to like here. We can see the mines behind the town, their position subtly dominates Breen’s Spring and is a visual cue of how important it is to the people here. We also see both a road and a river to transport whatever is being mined out as well as get supplies in. The town itself is tightly packed in what little flat ground there is, with a few more buildings that are either industrial or more houses away from the town itself.

The problem is that there’s no dock visible at the town itself to load and unload boats, while the bridge would make it hard for ships of any size to reach the town in the first place. Perhaps they dock before the town as there are some buildings there.

But why is there a bridge in the first place? It does not appear there is much on the other side beyond a path too narrow for carts or wagons and a gallows. I highly doubt it sees much traffic as that side appears to lead to the mountains Rand and Mat had to cross after escaping Shadar Logoth,

The best reason I can think of for that bridge existing is because people do go out to find something in those mountains. I just don’t know what that could be.

I do like what I’ve seen of this series so far. There were quite a few more ruins I didn’t mention in this post but they helped to tell the background of this world. The Wheel of Time takes place not in medieval fantasy world, but in a post-apocalyptic fantasy world.

The landscape of The Wheel of Time is littered with history and the people that made the show did not forget this.

But what did you think after seeing the first three episodes? And what do you want me to focus on in this series? Let me know in the comments.