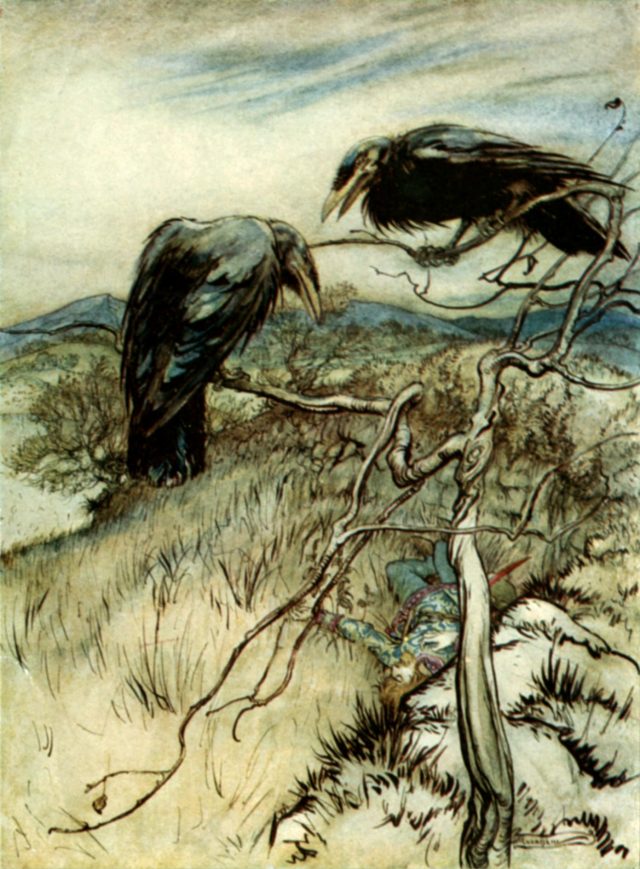 With The Living Sword 3 coming out soon, I thought I would devote this blog post to talking about the mythical background to the Conclave Festival. Today, I will regale to you the tale of the First Conclave. I’d planned to do this within the book but in the end that part got cut so I will tell you the foundational myth of the Mochedan.

The world was not always as it is now. Once, spirits roamed as they pleased as the spiritual and material were mixed like mud on the river’s bank. But as mud dries so did the world. Spirits found their world drifting away from ours and with it the visceral experiences only the material could provide. For without sight, how could they see beauty? Without sound, how could they hear joy? Without flavor, how could they experience delight?

Many spirits refused to surrender to this. They took parts of the material world and shaped them into a resemblance into which they could pour themselves. Mountains rose, forests sprang up, and rivers crawled through the land. Other spirits needed more, they created birds that could fly through the sky like they could. That could run and jump, swim or crawl. But these great spirits found that these small creatures could only contain the smallest part of themselves. An ember, barely enough for awareness of the physical. The Great Spirits hungered for more.

It was cunning Crow who came up with the notion that it was not form that they needed. What they needed was the right mind. Crow flew around the world, visiting one Great Spirit after another. Sharing his idea, calling upon them to gather to create the anchor they would need to keep one leg in the physical world.

They gathered in one of the few places that remained connected to both worlds. The standing stones of Chappenuioc. There, Crow explained himself fully on what they needed to do. It would need a shape, for everything in our world has a shape. But it was the mind that was most important. If the mind could approach their own, could hold a portion of their greatness, then they could continue to experience this world through them.

Not all were convinced, but most leaped at this chance. Those that remained poured a portion of themselves into a seed. And came to blows as they argued about who had the right to give what part that would make up this new mind. And who would gain some of the resulting beings? Again, Crow came to the rescue with a new suggestion.

Rather than fight, they should compete in a series of contests. The winner would gain the reward of providing that part of the new mind and a portion of the resulting beings.

All threw themselves into the contests, including Crow. But cunning Crow had forgotten one thing. He did not fly as fast as Hawk, he did not run as fast Hare, he was not as tough as Turtle, strong as Bear, ferocious as Wolf. He thought his time had come when it came to the contest of riddles, only to be stumped by his cousin Raven who gave us intelligence.

And with every loss, as he watched one Great Spirit after another add their essence to the shining seed at the heart of the standing stones, resentment grew in Crow’s liver. Was this not his idea? Had he not gathered all here? And yet he would be left out in the end? With nothing to show for all his hard work? No, Crow would not let that happen.

He announced that the hour grew late, and more contests would need to be held to complete the mind. They should retire and resume tomorrow. And to celebrate all the winners of this first day, Crow would throw a feast. Tired and hungry, all agreed and so they left Chappenuioc to feast in Crow’s hall he had erected nearby.

The Great Spirits feasted and celebrated that night. And in the center was Crow who laughed and made merry. Congratulating all the winners and encouraging all to do better tomorrow. The party lasted late into the night until Crow retired. Others asked their host to say, but Crow pointed out that he had not won once yet and so he wanted a full rest to improve his chances tomorrow.

But when he left the hall, it was not to his nest that he went. And unknown to Crow himself, he did not retire unattended. His cousin Raven, smart Raven, had grown suspicious at how happy Crow had been despite all his losses. Crow had some good qualities, magnanimity was not one of them.

And so Raven saw her cousin sneak into Chappenuioc and take shining seed that everyone had poured so much effort into. Her shock gave her away and Crow, caught in the act, flew away. Raven called out, rallying the other Great Spirits who went in pursuit.

Crow did all he could to shake his pursuers. He flew low among the trees to shake Hawk and Eagle, only to find Wolf snapping at his tail. He flew over the ocean, but Orca was there to greet him. He fled into a cave, only to have Mole dig him out.

But Crow would not give up, for he knew he was smarter than them. He disguised himself as a rock, a thundercloud, the shadow of a tree. Only to be caught out each time. The rock would float where the others dropped to the bottom of the lake, the thundercloud drifted against the wind, the shadow would grow darker as the sun climbed higher into the sky.

Cornered at last, Crow grew desperate. Thinking only of escape now, he dropped the seed in a fire hoping the others would seek to save it rather than to stop him. But he had not thought things through. As he had taken the seed, he had poured his greed into it. As he had fled the others, he had added fear. When Crow tried to hide, he gave us the ability to lie. The seed was now ripe, and in the fire it blossomed.

Before the Great Spirits could do anything people began rolling out of the blaze, baked by the fire. When the 128th human jumped from the fire the seed was spent and gone. It was these people that the Great Spirits divided among themselves, these are the Mochedan.

The Stories We Tell

The above tale is one of the tales the Mochedan tell of themselves. How much of it is true within the world of the Living Sword, I will leave to you to wonder about.

I also want to take this time to share a couple of links I’ve come across in the last couple of months.

Ancient World Magazine – This site by ancient historians and archaeologists about the ancient world is a great read which gets updated frequently. If you’re interested in the Ancient World, especially Greek and Roman history, you should visit this site.

Tasting History with Max Miller – The format for this youtube channel is that Max Miller takes a historic recipe and recreates the dish. While he does that he also shares some related history with the viewers. It is funny, delightful, and helps us connect with history in a new way. Even if you’re not into cooking I recommend you give it a try.

I’m closing this post with a reminder that The Living Sword 3 – The Burden of Legacy is coming out the 6th of August.